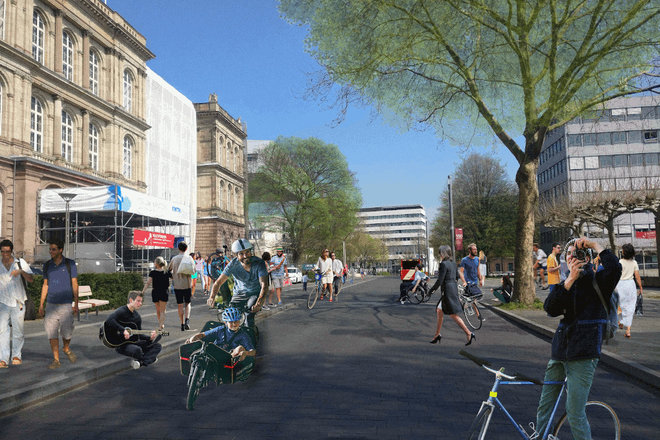 Added a notice about the backgrounds of this petition.


Neue Begründung: Several ideas for improving the situation for pedestrians and cycle traffic at Templergraben have been discussed in the past decades and desired by the RWTH for a long time. During the previous redesign of the Templergraben, politics intended a considerable togetherness of all traffic participants. Thus, this area was planned accordingly - without cycle lanes and pedestrian crossings. However, the only action taken for traffic calming was a speed limit of 30 km/h for the motorised traffic.
This turned out to be insufficient in practice to satisfy the high requirements regarding pedestrians and cycle traffic as well as public transport. Especially during rush hours, high car traffic and in consequence traffic backlogs can be observed. This impedes pedestrians crossing the streets and cyclists switch to the sidewalk - thus, the situation is the opposite of what was intended.
Even after the temporary closure of the Kármán building, this road section plays a major role for pedestrians. Furthermore, the RWTH is planning an overhaul of the main campus, starting this year at the Kármán forecourt. Traffic calming would meet the demands of a campus regarding mobility and quality of stay. Due to the changed nature of the Templergraben, the university and the city center continue to grow together - both spatially and mentally.
Not only on the Templergraben itself, but also in the surrounding area, the proposed measure could result in significant improvements for pedestrian and cycle traffic as well as public transport. This includes the Wüllnerstrasse, which is used by 16 bus routes, and the section of the Templergraben towards the Driescher Gässchen, the highly frequented traffic lights for pedestrians and the section of the Templergraben towards the Anna-Sittarz-Platz for cyclists.
Additionally, less motorised traffic on the Grabenring would benefit both residents from less noise pollution and improved air quality, and public transport would be enhanced in the inner city area. Furthermore, there would be a strong signal for an ecological traffic transformation in Aachen and a commitment to the resolution of the Climate Emergency in June 2019.
As a cycle ring road as part of the planned cycle priority network, the Grabenring plays a key role in the future development of bicycle traffic. With regard to the Radentscheid Aachen, there are discussions about making improving the Grabenring for cyclists as well. The ADFC Aachen has already submitted a comprehensive proposal for this in 2017. The implementation of the proposed measure at the Templergraben would be a first step and could provide valuable insights for the further development of cycle traffic and implementation of ecological traffic transformation in Aachen.
Notice: This petition is handed in officially by the student initiative Uni.Urban.Mobil. and the associations VCD Aachen-Düren e.V. and ADFC Aachen e.V. More information is available on uum-ac.de/templergraben (in German).