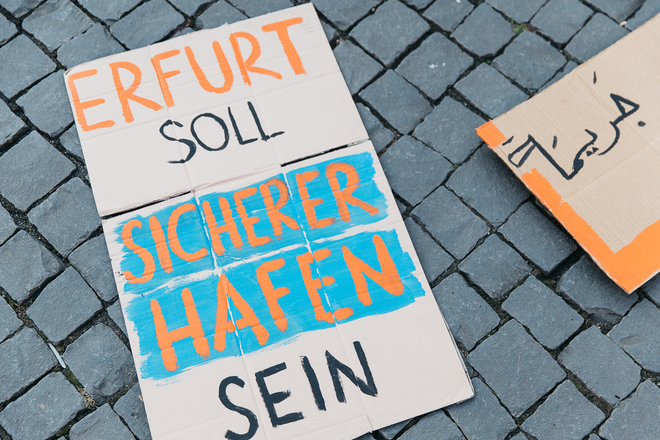 Petitioner not public
Petition is directed to
Mayor Andreas Bausewein, City council of Erfurt
647 Supporters 497 in Erfurt
Petitioner did not submit the petition. 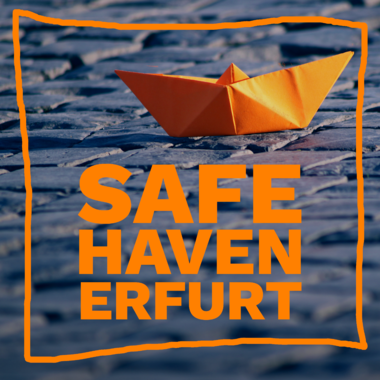 For a week now, Erfurt can call itself one of the 154 safe havens in Germany! An important step in the right direction and a reason to celebrate - at least briefly. What is most important for us is what follows now. Behind us lies a long back and forth of committees, submissions, opinions, negotiations and a long search for compromises. The decision taken on Wednesday 27 May is a reason to breathe a sigh of relief. But we will continue to work on it: we will monitor the practical implementation of the points that have been decided upon and, following on from that, demand further steps! Our work is far from being done.

We want to make transparent what was actually going on - and what was not. After all, what compromise could five political groups (SPD, LINKE, GRÜNE, Freie Wähler/Piraten, Mehrwertstadt) agree on? And what not?

What was decided?
... that the city of Erfurt officially shows solidarity with refugees and people who are on the run.
... that it is in solidarity with the aims of the Potsdam Declaration and also declares itself to be a supporter of a Thuringian state admissions programme. (Such a programme was decided this week for people from the Greek camps)
... that the city administration is commissioned to draw up a concept of measures for the integration concept that has been in place for years. The Foreigners' Advisory Council and other actors in migration work are to be involved and several proposed measures are to be taken into consideration. These are primarily concerned with active steps to improve the situation for refugees and migrants in the Erfurt Foreigners Authority. We had originally developed these demands as fixed points of resolution, they have now become "proposals for measures". We hope that they will actually be implemented.

However, the comparison with the original proposal "Making Erfurt a safe haven", which the city council factions LEFT, GREENS and Value Added City had worked out together with us, throws a somewhat more differentiated - possibly sobering - light on it. We look back: Over months we actively contributed our demands to the development of this proposal. Apart from the "usual" SEABRIDGE demands, which are aimed at the mass death in the Mediterranean, there was no way to wipe out the problem: The city of Erfurt also has to deal with grievances concerning the situation of refugees who have already arrived here. In exchange with the Refugee Council of Thuringia and with people who have made their own experiences with the Erfurt Foreigners Authority, a lot of things came together. In the end, one application became two - one with demands in the supra-regional SEEBRÜCKE context and one with measures on site for safe arrival AND stay for refugees. For that is the importance of a consistent safe haven. It is not without reason that several hundred fugitives and migrants took to the streets in Erfurt last year against arbitrary action by the authorities and racist discrimination. To claim that Erfurt "has long been a safe haven", as the SPD often put it, we think is naive and wrong.

What was NOT decided?
In the course of the debate with other factions, several demands finally fell through - through different ideas of importance, responsibilities and feasibility and through the attempt to find jointly feasible compromises. So in short and painful terms: Not decided was...
... the signing of the Potsdam Declaration and thus the accession to the Cities Alliance of safe havens for networking with other cities
... the active support of sea rescue
... a receptiveness beyond the distribution key and
... a declaration of solidarity with the goals of the Seebrücke!
... an appeal by the city of Erfurt to the federal government to support European municipalities and regions in the reception and integration of refugees at European level.

The sobering realisation that a clear position against deportations - which must be rejected always and everywhere, no matter by whom, no matter to which country - has no place in an Erfurt city council motion if a majority is to be found for it, still hurts. #StopDeportation

So we have not achieved all the demands - but we have achieved much more than nothing. We would like to thank all members of the city council who have now voted for the motion, for a safe haven for Erfurt in this form.

To all supporters who supported our open letter, accompanied us on the streets, during the month of action and during our online campaign #OpenErfurt: Thank you!

This is just the beginning of a process towards a real safe haven Erfurt. We continue to fight for legal and safe escape routes, for freedom of movement for all!