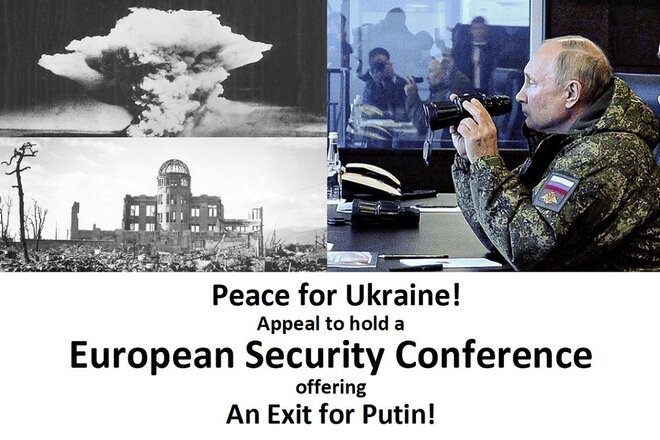 A European Security Conference to end the war in Ukraine and the danger of nuclear escalation!

There seems to be only one viable way out of the fatal escalation logic of the war in Ukraine and out of the danger of nuclear escalation:

First: making it resolutely and practically clear to Putin's Russia that Ukraine and the 'West' will not allow a military victory, a violent annexation of parts of Ukraine, plus a clear warning that the use of tactical nuclear weapons in Ukraine or elsewhere with the consequences for all of Europe and the world (fall-out) must be seen as an attack on the EU and NATO as well, and can have no other consequence than the elimination of Russia's ability to continue waging such a war, using all the necessary means;

Secondly: at the same time (!) an offer to negotiate with Russia that Putin cannot refuse, and which opens up a face-saving way out of the war for him and his sympathizers.

Firstly: European-coordinated delivery of weapons that allow Ukraine to act effectively (!) against the Russian occupying power, in particular delivery of the available armored personnel carriers and main battle tanks, especially Leopard I and II as well as Marder, in connection with a sufficient number of anti-aircraft systems (Iris -T SLM, Patriot etc.) for the protection of large cities, and artillery systems for the destruction of enemy infrastructure in depth (HIMARS, MARS, Panzerhaubitze 2000 etc.), as well as the delivery of the necessary close-combat armament and the necessary logistics and supply of ammunition, energy, accomodation, clothing and food.

Second: Convening a major "European Security Conference" in Berlin as soon as possible, initiated and organized by OSCE, NATO and EU, if possible under the auspices of the UN, with an invitation and concrete offers to negotiate to Russia. The Munich Security Conference (MSC) could serve as a preparatory working forum, which would then have to be followed promptly by an official OSCE conference.

As main goals should be offered respectively envisaged:

1.   Establishment of a neutral European Security Zone without offensive weapons taking into consideration the security interests of NATO as well as of the Russian Federation;

2.   Clarification of the status of the embattled regions (Donbass, Crimea) by means of referenda under democratic circumstances and under international surveillance (that is at least after a military retreat of the Russion Federation, demilitarization [under UN-protection], after return of refugees, and after an information- and discussion-campaign of sufficient duration, internationally managed and supervised, and with secret ballot).

It's clear to everyone: Russia must not win this war! The Ukraine would then only be the appetizer for a subsequent dinner with several courses... (cf. Hitler, the Sudetenland, etc.) It is also clear: Putin's Russia cannot lose this war! Because that would be an unbearable humiliation not only for Putin, but also for many Russians!

In the face of an imminent, conventional defeat, Putin and his camarilla have only one means of self-defense: nuclear weapons! If this fatal psycho-logic is to be stopped, a concrete, quick way out of the Ukraine war must be found! What could such an exit be?

Currently there seem to be only two parties: one calls for more weapons for the Ukrainians so that Ukraine "wins" (that is, drives the Russians out of their country); the others shout: "No weapons to Ukraine! Negotiate with Putin!" And the impression is that there is nothing between these two camps.

And this missing center will be the only possible solution to the conflict: On the one hand, signaling clearly to Putin and his clique by military means that they cannot win the war! And that means providing effective military support to Ukraine instead of half-heartedly prolonging the war, the dying and the atrocities. On the other hand, however, actively making an offer to negotiate with Putin, which firstly he cannot refuse and secondly gives him a face-saving way out! What could that be?

Putin's official justification for the war - not to say his pretense - was that evil, aggressive NATO = USA was moving dangerously close to poor, peace-loving Russia, almost encircling it in order to station its offensive weapons on Russia's border. (The actual main motive should probably be Putin's desire to restore the "Holy Rus" and to go down in history as "Vladimir II.".) So the 'narrative' of an aggressively advancing NATO = USA, supported by the vassals of the EU, was and is the wind in Putin's sails. This wind must be taken out of Putin's sails. And logically this can only happen if NATO and the EU, preferably together with Ukraine, will make actively a big peace offer to Putin! So: schedule a big "European peace conference", invite Putin to it, and make it clear from the start that Russia is being offered a security treaty whose main object is a security zone in which no threatening offensive weapons will be stationed. It would be particularly beneficial if Ukraine also offered not to join NATO - which does not rule out that the West militarily strengthens Ukraine to the point where it is capable of self-defense, or that Ukraine receives a credible security guarantee.

And what should happen with and in the occupied or annexed territories? Unfortunately, unfortunately, 'the democratic West' missed the chance to introduce real referendums in these oblasts as a 'chip' in negotiations. Putin has already staged them for his propaganda. All that remains is the possibility, with which democratic powers can also agree, that these referendums be repeated again under acceptable conditions. Alternatives to offer: independence; federation as largely free states with Ukraine or Russia; Incorporation as administrative districts in Ukraine or Russia. Putin would have to agree to such a repetition of the referenda - under corresponding pressure - because he would have to show himself confident that the result of the first vote would be repeated, because the majority of the population of Russian origin could still want nothing else but to return to beloved Russia...

An alternative or an addition could be that Ukraine - as part of a policy of multicultural tolerance - offers special rights for the Russian-speaking population and those of Russian origin, e.g.: Russian as a second official language, Russian language and culture in lessons in schools, promotion of Russian culture . That, too, would take the wind out of Putin's propaganda-sails and expose the lie of the "neo-Nazi regime in Kiev."

With a security treaty of this kind in hand, Putin can end the war, come home triumphant and say, "You see! We won. The West caved in, withdrew its arms, and agreed that our Russian compatriots in Ukraine be free to decide about themselves and live their culture! Russia has proven its power and expanded its influence! Russia is again a great power in the world." And yet NATO would have done nothing but to fulfill its function as a peacekeeping defense alliance.

Thank you for your support, Hilmar H. WERNER from Berlin
Question to the initiator
openpetition.de/!rvwqh 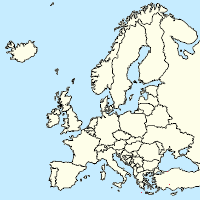