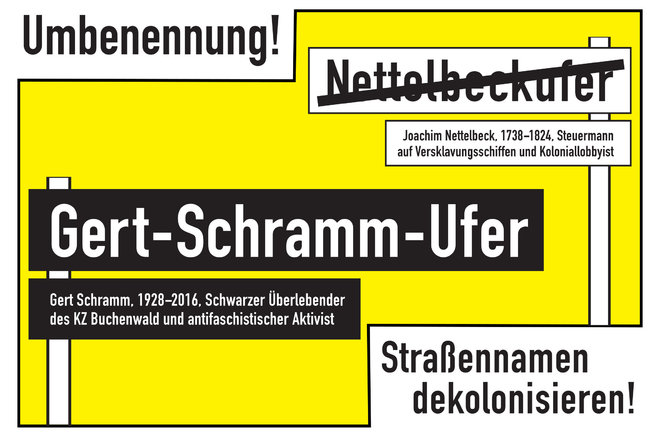 We, the “Initiative of Black People in Germany” and “Decolonize Erfurt", will hand over to the city council of Erfurt a request to rename the street Nettelbeck-Ufer into Gert-Schramm-Ufer. With this petition we would like to solicit your support and initiate a public discussion.

Street names express the self-understanding of a society. People after whom streets are named serve as role models and provide moral orientation. Joachim Nettelbeck (1738–1824) was a Prussian sailor, who was involved in the transatlantic slave trade, who tried to persuade three Prussian kings to acquire colonies, and who, as a defender of his hometown Kolberg against Napoleon, became a "national hero" and prototype for the militarization of the German bourgeoisie. The colonial movement of the German Empire declared him its forerunner; under National Socialism he became a propaganda icon. For a city that considers itself to be democratic, diverse and cosmopolitan, such a person is unsuitable as the eponym of a street.

The new eponym, by contrast, stands with his life exemplary for the democratic promise of freedom, equality and solidarity. Born in 1928 as the son of an African-American engineer and a German seamstress, Gert Schramm was deported by the Nazis to the Buchenwald concentration camp because he was black. He survived thanks to the help of his fellow communist detainees. In the GDR, he was in constant conflict with the party bureaucracy. After 1989, Schramm travelled throughout the country – also to Erfurt – as a witness, in order to fight against forgetting and the spread of right-wing extremism. Two years before his death, in 2014, he was awarded the Federal Cross of Merit.

Seventy-five years after the liberation of Auschwitz and Buchenwald and over a hundred years after the end of the German Colonial Empire, it is time for a street in Erfurt to be named after a black person.

Gert Schramm was born in a house on the very Nettelbeck-Ufer in Erfurt. Given this fact and the connection that exists between the two people – Schramm's ancestors were victims of the very transatlantic slave trade in which Nettelbeck was involved – we believe it is imperative not to name just any street in Erfurt after Gert Schramm, but to rename the Nettelbeck-Ufer after him.

"Decolonize Erfurt" and the "Initiative of Black People in Germany" are also calling on the city of Erfurt to make sure that the renaming only results in as little as possible financial and other burdens for the residents and to set up an information board that elucidates the history of the street and its eponyms. Renaming a street does not mean to erase its history, but to tell this history afresh from the perspective of democratic values.

Thank you for your support, Decolonize Erfurt from Erfurt
Question to the initiator
openpetition.de/!xjpsq 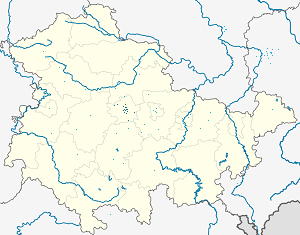