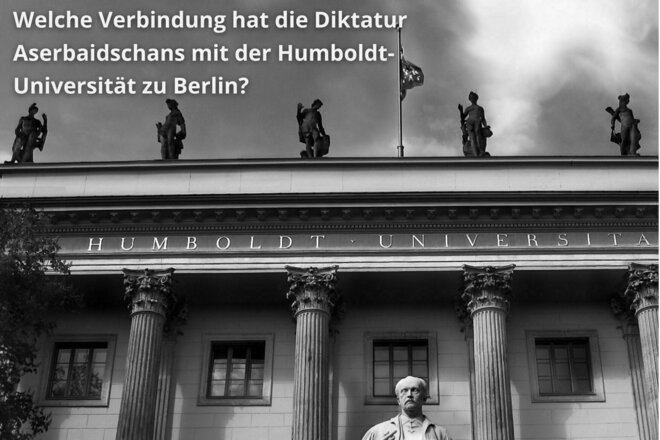 Over 11 years the Humboldt Uni took money from a corrupt dictatorship: we demand reassessment

Lilit Kocharyan
Petition is directed to
Humboldt-Universität zu Berlin
701 Supporters 404 in Germany
1% from 50.000 for quorum

Initiative for independent and transparent science

The financing of the endowed Chair of “History of Azerbaijan” at the Humboldt University of Berlin by a dictatorship must be entirely reappraised.

Together for independent and transparent science

We demand a reappraisal of the establishment of the Endowed Chair of “Geschichte Aserbaidschans” (History of Azerbaijan). Since its establishment, the financing of the chair with considerable funds from the Azerbaijani state has raised considerable doubts about the freedom of science and the independence of the (German) educational system.

The Chair of “History of Azerbaijan” was established in October 2010, at the Humboldt University of Berlin, financed by the Berlin Embassy of the authoritarian regime of Azerbaijan – a country accused by human rights organizations such as Amnesty International and Human Rights Watch for decades, of flagrant violations of basic rights such as freedom of the press, freedom of expression and freedom of assembly, and of violently persecuting political opponents and activists.

The Humboldt University of Berlin is not only the only university in Germany to have a Chair financed by a dictatorship, but has also failed to condemn unequivocally the highly questionable involvement of the Chair holder Prof. Dr. Eva-Maria Auch with the Azerbaijani regime.

During a recent trip to Azerbaijan, Ms. Auch congratulated Azerbaijan's representatives on the “victory” over the Armenian population in the war over Nagorno-Karabakh (Artsakh; September 27, 2020 to November 10, 2020), - a “victory” that was the result of most violent use of force resulting in thousands of deaths and ethnic cleansing, and she also most gruesomely visited the Aliyev regime’s "Military Trophy Park" – a tasteless demonstration of glorification of violence against Armenians and the normalisation of hatred propagated on official level by Azerbaijan. Among other things, wax dolls depicting dying Armenian soldiers in dehumanising and undignifying ways are on display there - surrounded by spoils of war such as helmets and weapons of fallen Armenians.The sculptures echo 19th-century anti-Armenian stereotypes ("hook-nosed", "greedy") or repeat anti-Semitic tropes. According to Azerbaijani human rights activist Bahruz Samadov, the trophy park's dehumanization of Armenian opponents, which is said to have shocked many people in Azerbaijan as well, reflects the logic of exclusion that has prevailed there for years, namely that internal and external enemies of the Aliyev regime must be eliminated.

In retrospect, Ms. Auch declares the "current massive criticism" of her visit to the trophy park an expression of misunderstanding. She sees herself as a victim of a conspiracy that wants to prevent scientific research on Azerbaijan for political reasons. In this context, she explicitly speaks of a "campaign" that is "well-funded in the German election campaign" (“deutschen Wahlkampf wohlfeil”) and orchestrated by "campaign leaders" – without even attempting to substantiate her serious accusations or to present evidence of such a conspiracy. Moreover, there is no explicit statement on the criticism of the funding of the Chair, although this criticism is more than justified.

There are indisputable facts:

Already in 2014, "DIE ZEIT" asked whether the Humboldt University of Berlin was doing ‘’PR for an unjust regime’’ and referred to the cooperation agreement between the University and the Azerbaijani Embassy, which was agreed upon when the Chair was established and  stating that the professorship, in addition to research and teaching, should contribute to the level of awareness of Azerbaijan's history. Moreover, the Embassy was be given the opportunity to provide suggestions for the content-related work of the endowed guest professorship.

Thank you for your support, Lilit Kocharyan from Berlin
Question to the initiator
openpetition.de/!hu7azerbaijan

History falsification is a crime against human culture and values. The history should be known as is. The data refers to 166 statements.