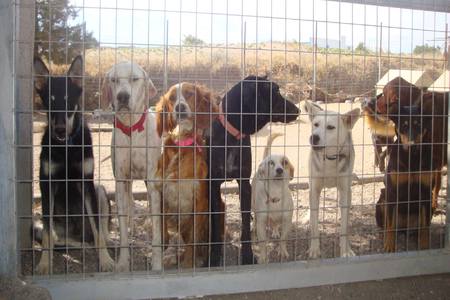 Animal Shelter in Danger at the Island of Santorin

Petitioner not public
Petition is directed to
Anastasios-Nikolaos Zorzos
3.606 Supporters
Petitioner did not submit the petition.

Since a couple of years, Tierschutzverein Santorini e.V. from Mainz (Germany) and their daughter organisation SAWA (Santorini Animal Welfare Association) are running an animal shelter on the island of Santorini (Greece). Main objective is to provide a safe and healthy environment to stray dogs from the island as also a safe home for the donkeys on the island. Once the stray dogs of Santorini were a tourist attraction because of their calm and friendly behavior. In the past these dogs were poisoned, shot to death or simply drowned to clean the streets during the winter. No Tourist should see how the First-Class Island Santorini act in reality. The animal shelter that was put in place from SAWA and TSV Santorini e.V. act as a safe harbour for these animals since years. SAWA helps the animals on the island, TSV Santorini e.V. tries to found new homes for most of these dogs. Now, after years of acceptance, the Goverment of the Island of Santorini suddenly think that this animal shelter is illegal and filed a court case against the Manager of the shelter. The case will take place on October 20th. There was an agreement that until the final decision of the court, the shelter could be active and operational. Unfortunately, the Politicans of Santorini now decided to ignore any agreement and since two weeks they try to tear down the fences to let more than 80 dogs running free over the island. Most of these dogs have grown up from a puppy to their current size and have no idea how to survive on the streets. They are simply put to death - indirectly - because the tourist season comes to an end and the poisining action is starting right now. Also if an hungry dog catches a chicken, the gun will taken out by the owners and the dog will be shot. This morning community workers were on site and tried to tear down the fences but were stopped by Volunteers and animal welfare assistants. But we fear that sooner or later they will come by night and fullfil their bad work and destroy the fences. This will be the end for most of the dogs.

Please help us to keep the animal shelter at Santorini alive and operational. Request from the local government to finally legalize the shelter. It is not fair to let more than 80 dogs left to die in the the streets of Santorini.

Since years Organizations like SAWA and TSV Santorini e.V. are investing uncounted hours of work to help the animals. Not to mention the countless donations and investments done to keep the shelter operational and provide the best support for all the animals.

The Island of Santorini runs commercials for its beauty and tranquility. But behind the scenes animals are pained and killed. The animal shelter of Santorini is the only safe harbor for these creatures. Please give them a chance to survive.

Thank you for your support
openpetition.de/!mkmxw