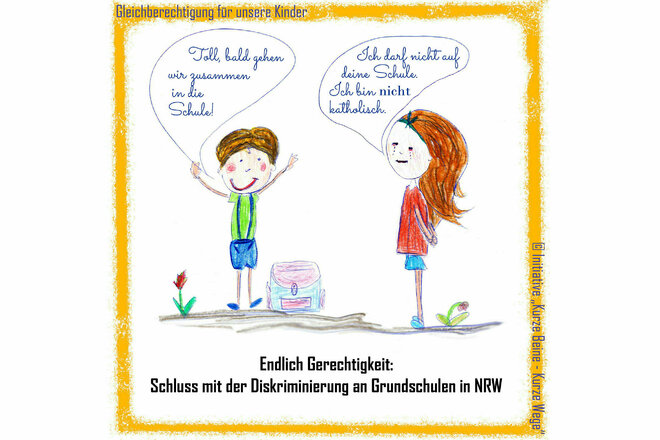 Justice at last: an end to discrimination at primary schools in North Rhine-Westphalia!

This petition is about a peculiarity in the public education system of the German federal state of North Rhine-Westfalia that you would rather believe to find in countries like Turkey, Pakistan or Ireland (some 20 or 30 years ago).

We are parents and teachers in North Rhine-Westphalia who are fed up with the fact that children and their families are massively discriminated against by the coexistence of community schools and denominational public schools in this federal state of Germany. One third of all public primary schools in North Rhine-Westphalia are denominational, 90% of them are Catholic, the others mostly Protestant.

These elementary schools are 100% financed by all taxpayers and are run by the municipalities. The churches don't pay a cent!

Year after year, parents are completely called by surprise because their child is not admitted to the nearby primary school with his or her friends - because catholic children have to be admitted first. Only if there are too few registrations of Catholic children will other children be accepted. Criteria that normally apply - is there a sibling already at this school? How far is the school? Has the child attended a kindergarten near the school? - then no longer apply. It should be noted that we don't ask for elimination of religion from these schools.

We demand: Religion must no longer play a role in the admission of children to public primary schools in North Rhine-Westphalia. Children must be allowed to study together at the nearest public school!

The discrimination of teachers on the basis of their belief or non-belief is just as unbearable: The denomination still plays a decisive role in whether teachers at a denominational school in North Rhine-Westphalia are allowed to get a permanent position or take on a leadership role. Vacant rector positions at public denominational schools will not be filled even if there are competent candidates. Their confession is more important than their qualification.

We therefore demand: All state denominational schools must be converted into community schools. For this it is necessary to change the state constitution of North Rhine-Westphalia.

We call on the state parliament to take this long overdue step, over 50 years after Bavaria, Rhineland-Palatinate and Baden-Württemberg!

It's about justice and the end of discrimination against children and teachers!

"Our children were immensely disappointed that they couldn't go to the same school with their friends from our street." (Jan Reche, Bonn, 2021)

“I want there to be no more denominational schools. I want to be treated fairly. "(Meliha Kir, Olpe 2020)

“We are Protestant. For this reason alone, our son is not allowed to go to the nearby elementary school with his kindergarten friends, even though his older brother already attends this school. These old regulations have long since become obsolete and must now finally be abolished in North Rhine-Westphalia! " (Sarah Melis, Bocholt, 2021)

“The current situation is unbearable. The school community should reflect the composition of the neighborhood. "(Participants in a public discussion event in Telgte, 2020)

“We couldn't believe it and were shocked! Our children suffer psychologically from such determinations and decisions. We teachers are always told that we should work for integration and inclusion, but then to see and personally experience that politics, the city etc. are acting against integration, makes me incredibly sad. "(Nuray Uyar , Olpe 2020)

“Our children were not baptized because we wanted to raise them openly to religious beliefs. Therefore, they were not allowed to go to the elementary school in the immediate vicinity of our home and had to cross a busy street to get to the nearest community school. Despite our professional activities, we accompanied her for four years because we saw no other way to protect her. Our children have learned that the Catholic Church does not value people (including 6-year-old children) equally and they have lost all interest in dealing with religious issues. "(Dr. Birgit Wolz, Bonn, 2021)

“It is amazing how little one has to do with the Catholic faith / the Catholic Church in everyday work, but how much this defines the framework for our work... It is always bitter when parents withdraw their reigistration at short notice when they find that we are a Catholic denominational school and what consequences this has. However, many Catholic children who are close to the school are taken to another primary school at the city's expense because fewer children with a migrant background are schooled there and they have the freedom to choose their preferred type of school. "(Head of a Catholic primary school in NRW, 2021)

“For years I was allowed to be provisional principal of a public Catholic primary school. However, my application for the position was rejected despite good professional qualifications because I am a Protestant. My fundamental rights have never again been so violated. " (Katja Wiegand, Höxter district)

Lots of other arguments at https://www.kurzebeinekurzewege.de

Thank you for your support, Kurze Beine - kurze Wege from Bonn
Question to the initiator
openpetition.de/!cxgzp 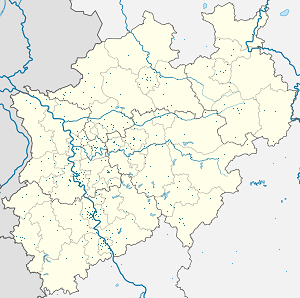