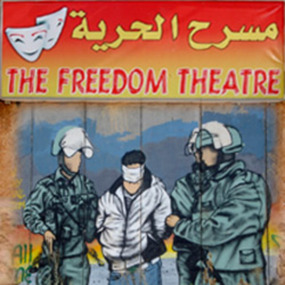 My name is Motaz Malhees , I'm Palestinian student in the Freedom Theater of Jenin refugee camp . I write this mail to denounce the illegal arrest of Nabil Al Raee. My theater director, and my second father.

The Freedom Theatre was founded by Zakaria Zubeidi , Juliano Mer-kahmis, and Jonatan Stanczak, . Juliano was the one who taught me to dream, to think that a change is possible, to fight for my dignity on the stage. Juliano thought the third intifada would be a "culture intifada ".

I always wanted to go to Haifa but I am Palestinian, is prohibited unless you have a special permit that Israel will never give me. I remember last year we were practicing the play : "Alice in Wonderland" and Juliano promised me that we would go in Haifa. I remember being so happy. My dream was almost done. Finally I would step Haifa!

But life is up and down.

A few days later, Anas , my best friend who I see as a brother called me saying: "Today Juliano was murder in front of the theater."He was killed with seven bullets. It was awful. But it was not time to cry. I have to keep on going fighting on the stage for the principles Juliano taught me. After Juliano Nabil Al Raee, actor, director who had been a collage of Juliano, came to the Freedom Theater.

Nabil was like a second father. We returned the will to fight. We always said that the soul of Juliano "was fighting within us." We were about to release our first film directed by Nabil. We went back to recover the illusion Julian gave us.

And again my friend Annas called me saying : "Yesterday the Israeli army has arrested Nabil illegally." He was taken last Wednesday at three in the morning. Entering his home in front of his wife and daughter of two years old.

They did not say where they will put him or what was the reason for his arrest. Today her daughter has nightmares, getting up in the middle of the night, asking for her father.

Israeli security forces accused Nabil of being under “terrorist” suspicion. However, there is no proof of his accusation. Nabil's abduction was not only a violation of human rights, but a violation of his own dignity as a person, artist, parent, and "father" for all of us.

Israel accuses any artist of being a terrorist. They want to prohibit our ability to create, to give us a “second of freedom on stage”.

Just a second of being free on the stage.

I write this mail to anyone actor, writer, painter, singer, photographer, director or artist who believes in the power of art as a tool for change, as Juliano did, toa ll my friend's who think that art is the best weapon to fight oppression . From this mail, I ask you to go to your Israeli embassies and protest to for prohibit us, The Freedom Theater, to create art; for calling us “terrorists”.

Protest in front of every israeli building for the release of Nabil, the return of our human rights.

This mail is a call to fight for art, the fight for our dignity, what makes us humans. i ask every one who blieve in aRt to support us