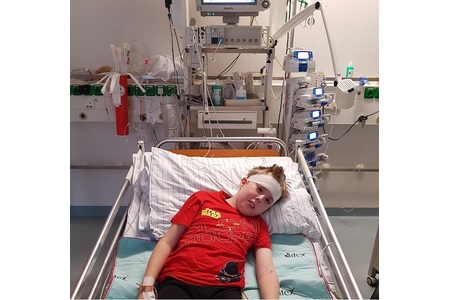 Petitioner not public
Petition is directed to
Company Agios, USA
106.142 Supporters
The petition was withdrawn by the petitioner

Our only child Maurice, 13, was diagnosed with a brain tumor in October 2016. It's inoperable, as there is no clear boundary to healthy tissue. Untreated, it is lethal. He is considered beyond treatment with what few medications are available. Since he has tumor mutation IDH1, which is treatable with a special medication called IVOSIDENIB by the American company AGIOS, we've inquired with them multiple times. Ivosidenib stops the progression of the tumor and makes it possible to survive several more years.

Costs are covered by German health insurance HKK nationally and through the police by the Volker-Reitz foundation (through your donations) internationally, the Charité hospital in Berlin will take care of the treatment. However, Agios won't release the medication, since it is still in the late phase of a study, and since Maurice isn't 18 years old yet. The worst side effect possible is listed as "diarrhea, in 1 of 20 cases." Dosages and toxicities have been well-documented by Agios.

We are waiving any legal claims, in writing, with physicians and Agios. Agios won't release the medication. Everyone else is recommending it.

This medication isn't affected by the age of the patient and would have the same effect on a 17-year-old that it has on an 18-year-old. The difference in years between 13 and 18 certainly is less than that between 18 and 95. Side effects can well be considered mild. If he doesn't get this medication, he will die for sure, what else is there to protect him from???

Please help us save the life of our son, we are merely asking for your online signature.

We ask for your support, from the bottom of our hearts. Thank you.

Thank you for your support
openpetition.de/!maurice