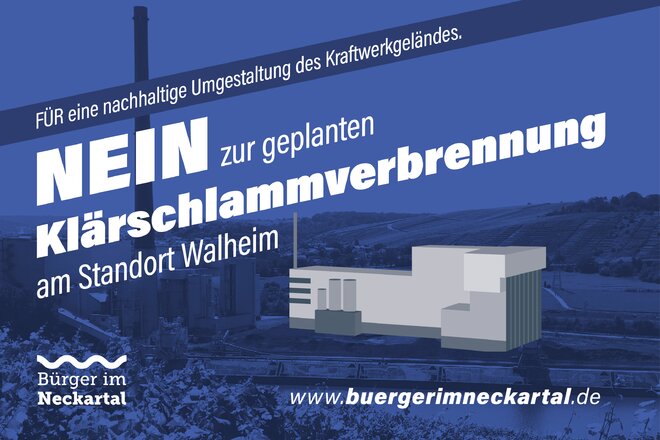 EnBW is planning a large plant for drying and burning sewage sludge in Walheim in addition to the existing coal-fired power plant and gas turbine, which are to be decommissioned. This is in the immediate neighborhood of dense residential development in the Neckar valley, surrounded by the impressive landscape of the steep vineyard slopes.

For us it is clear: a sewage sludge incineration plant at the Walheim site will worsen the quality of living and life for all citizens now and for future generations in the Neckar valley!

For all surrounding communities, especially Besigheim, Gemmrigheim, Kirchheim am Neckar and Walheim, this means additional traffic. Gemmrigheim, with its residential settlement on the Neckar Valley escarpment directly opposite and the threat of odour pollution from this plant, is particularly affected. In addition, significant development potential for Walheim and the region will be prevented for future generations.

With the planning of this large-scale plant, EnBW is opening a completely new chapter at the Walheim site and entering the waste disposal business. At the same time, a political decision was taken decades ago to forego the construction of further industrial settlements in the Neckar valley in the future.

It is clear: Neither the local councils nor the citizens of the surrounding communities want the plant intended by EnBW for drying and burning sewage sludge, but demand a sustainable and future-oriented use of the power plant site.

EnBW in Stuttgart shows how a sustainable transformation of a company site can succeed with its forward-looking project "Der neue Stöckach". Here, a former factory site is being transformed into a modern urban quarter.

A sewage sludge incineration plant in Walheim would instead create considerable burdens for Walheim and the surrounding communities, deteriorate the landscape in the Neckar valley for generations and prevent the development of a sustainable transformation of the site.

That is why we say NO to EnBW's intended plant in Walheim! Instead, we advocate FOR a sustainable transformation of the power plant site and the riverside area along the Neckar.

For us, this includes a mix of housing, services and small businesses, to create urgently needed housing and new jobs for the region. Parts of the power plant site can be renatured for local recreation and tourist enhancement. Air pollution control and quality of life for the directly surrounding communities, such as Besigheim, Gemmrigheim, Kirchheim am Neckar and Walheim, will also benefit.

The exit from coal throughout Germany is approaching and with it the operation of the coal-fired power plant in Walheim will also be history. For the time after that, EnBW plans to build a plant for drying and burning sewage sludge on the power plant site in addition to the existing coal-fired power plant and the gas turbine. Other industrial plants for phosphorus recovery and fertiliser production may follow later.

Decades ago, the local council in Walheim decided not to allow any further industrial plants in the Neckar valley in the future. This was an important criteria in 1973 when the inter-municipal industrial area Ottmarsheimer Höhe was established.

On 16 September 2021, the Walheim municipal council decisively rejected the concrete plans to build a sewage sludge incineration plant at the Walheim site and instead suggested "developing a use that does justice to the concerns of people and the environment in the narrow Neckar valley" and offers prospects for our children and grandchildren.

In the context of the update of the land use plan 2020-2035 of the Besigheim municipal association, the initiative "Citizens in the Neckar Valley" pleads for the designation of housing, services and small businesses and the upgrading of the river landscape and the riparian area along the Neckar as a basic designation in the land use plan. The letters were supported by 1,000 citizens in Walheim and Gemmrigheim with their signatures.

Instead, EnBW's proposed plant for drying and incinerating sewage sludge would create significant burdens for Walheim and the surrounding communities, deteriorate the landscape in the Neckar valley for tourism concerns and future generations, and prevent the development of a sustainable transformation of the site.

NOW is the time to campaign AGAINST sewage sludge incineration in Walheim and instead FOR a sustainable redevelopment of the power plant site. It is important to seize the opportunity now, to become active in order to preserve the quality of life in our region and to protect it for the future!

Thank you for your support, Bürger im Neckartal from Walheim
Question to the initiator
openpetition.de/!walheimkvaeng 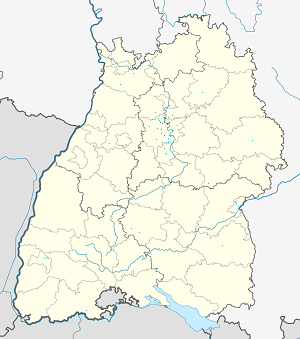